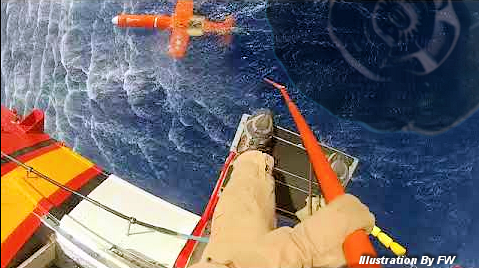 down with Joe Rogan for a most riveting, informative interview. Aside from describing his encounter in great detail, he disclosed that since the UFO encounter has been made public, other pilots have "come out of the woodwork" to tell him of their own encounters.

He described one instance as follows:

"One of the guys was a Navy helicopter pilot. He was flying a CH-53, a big heavy-lifter the Marine Corps uses for certain things. Off the East Coast they do a lot of shooting, at the time it was off Puerto Rico."

"The helo drops a swimmer in the water, he hooks the whole thing up and they fly back. The first time they were out and they were going to pick up a BQM, he's sitting in the front – in the CH-53 you can see down by your feet – and as he's looking down, they're 50 feet (15 metres) above the water, he sees this kind of dark mass coming up from the depths," he said. [The BQM is an Unmanned Aerial Vehicle (UAV) or drone; these are used as "realistic aerial target, capable of simulating enemy threats for gunnery and missile training exercises" and are capable of being recovered as a parachute is deployed by remote control a flotation kit is added for sea-based recovery.]

"As they hoist the BQM up, he's looking at this thing going, 'What the hell is that?' And then it just goes back down underwater. Once they pull the kid and the BQM out of the water, this object descends back into the depths."

This wasn't an isolated event, a similar incident happened a few months later:

"He's out picking up a torpedo, they hook the diver up on the winch, and as they're lowering him down, he sees this big mass," he said.

"He goes, 'It's not a submarine'. He's seen submarines before. Once you've seen a submarine you can't confuse it with something else. This big object, kind of circular, is coming up from the depths and he starts screaming through the intercom system to tell them to pull the diver up, and the diver's only a few feet from the water."

"They reverse the winch and the diver's thinking, 'What the hell is going on?' And all of a sudden he said the torpedo just got sucked down underwater, and the object just descended back down into the depths. They never recovered it."

Does Tom Delonge / TTSA Have Debris From An Alien Spacecraft?

UFO Encounter Reported With Another Aircraft Carrier, The U.S.S. Enterprise

“… Navy Already Knows What These So-Called UAP's [UFOs] Are”