Aerial Phenomena (NICAP). The CIA online reading room includes four pages of titles of files pertaining to NICAP. Among them is an archived photo of a 1957 newspaper clipping, pictured below, describing UFO advocacy undertaken by IC movers and shakers. 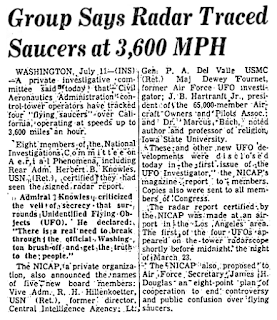 In what might be considered part of writing the TTSA playbook, the admiral criticized a veil of secrecy surrounding UFOs, declaring, "There is a real need to break through the official Washington brush-off and get the truth to the people."

The article goes on to name respected members of the IC who joined NICAP, including former DCI Roscoe Hillenkoetter. NICAP leaders also included Joseph Bryan III, a career intelligence officer now known to have been a CIA propaganda specialist and whose activities we explored.

The California saucer case was highlighted in the first issue of a NICAP magazine, UFO Investigator, distributed to its membership. "Copies were also sent to all members of Congress," the article added.

In conclusion, it was reported, "The NICAP also proposed to Air Force Secretary James H. Douglas an eight-point plan of cooperation to end controversy and public confusion over flying saucers."

The CIA's Infiltration of NICAP (The National Investigations Committee On Aerial Phenomena)?

Congress, UFOs, NICAP and The CIA