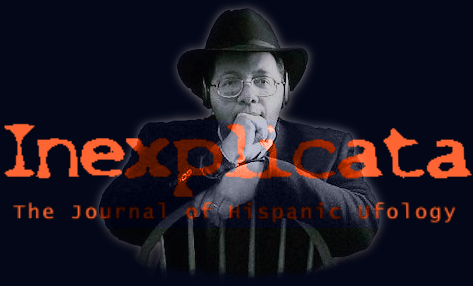 Beckley, ‘zines like Greg Bishop’s unrivaled The Excluded Middle, and the month also witnessed the christening of INEXPLICATA, the website of the Institute of Hispanic Ufology, with its unfortunate Star Trek: The Motion Picture musical theme, but musicalizing websites was quite a thing in those days. Oh, the joys of .wav files.

In congratulating me on my ubiquity, a friend and researcher from Pittsburgh said: “Scott, whatever you do, when you run out of ideas to write, please don’t become one of these ufologists-turned-skeptics. It would be so sad.” I reassured him laughingly that such a juncture was unlikely, and that he would know I’d run out of ideas when I started writing about werewolves.

We both shared a laugh and…two years later I was writing about werewolves in Fate Magazine. The ironies of life never fail to amaze me, but I was far from out of ideas.

The early ‘00s witnessed the birth of Arcana Mundi, INEXPLICATA Spanish language sister, which had quite a similar mission: to inform readers in Latin America and Spain about U.S. / U.K. and Australian cases that had not been picked up by the paranormal press in those countries. INEXPLICATA went on to become a journal, printing long-form articles by the leading lights of UFO/paranormal research en español. One of these – written by Javier García Blanco on the subject of saucer sightings during the Spanish Civil War – garnered tens of thousands of views and also appeared in Flying Saucer Review. Gordon Creighton would later tell me it was one of his features in the journal.

As the rhythm of UFO and paranormal events south of the border picked up, it was necessary to take a more responsive tack and translate news items immediately, posting them right away to the Internet. Mailing lists such as World of the Strange, created by the late Louise Lowry, carried stories about the Chupacabras’s predations in Chile and Argentina to a far-flung readership; Lucius Farish’s UFO Newsclipping Service honored us greatly by including the news items in his monthly releases, where they were committed to hardcopy (a blessing when it came to recovering information that was lost through many changes in computer hardware and software over the years). Robert Frola’s Australasian UFO – UFO Magazine – also carried the word to his readership. The Aughts were quite busy.
Strolling down memory lane is inevitable as circumstance compels me to make an announcement.

Effective immediately, INEXPLICATA will enter a hiatus of indefinite duration.

There are a few reasons for this; the most compelling being my wife’s illness – cerebral amyloidosis that for which there is no cure and with grim prospects. I find it hard to take an interest in the ‘far off and far away’ as I used to, faced with my new responsibilities. Readers can rest assured that any truly major piece of information will be reported, but “lights in the sky” (LITS, the CE-1s that the late Ivan T. Sanderson said should be round-filed) and the blurry photographs that accompany them will be sent to INEXPLICATA’s Facebook presence.

In the event that I do not return, I would like to use this space to thank the masters – and masters they were, in every sense of the word – who welcomed me to the field. The late George C. Andrews, the first major author to reply to my correspondence on the mind-blowing information revealed in his Extraterrestrials Among Us (Llewellyn, 1987), allowing me to become his agent, in later years, for the publication of Extraterrestrial Friends and Foes (Illuminet,1992); P.M.H. Edwards, the brilliant musician and ufologist whose voluminous correspondence and knowledge engrossed my filing cabinet and my mind, an unswerving advocate of the paranormal/interdimensional origin of the UFO phenomenon; Dr. Bernard E. Schwarz, whose supportive mail would arrive, as if by Jungian synchronicity, whenever I faced a setback. It is a sad shame that many future devotees of the subject that draws us together will never read his landmark UFO DYNAMICS; the late Bob Girard, who welcomed my first newsletter warmly to the pages of the Arcturus Books Catalogue…so many voices and thoughts that now belong to the history of our field.

In retrospect, my greatest disappointment – and it will haunt me to the end – was the inability to find a publisher for the late Salvador Freixedo’s Defendámonos de los Dioses. The stern Jesuit firebrand trusted a young translator with his work, and thanks to the late Ron Bonds of IllumiNet Press, “Visionaries, Mystics and Contactees” saw the light of day. But the understandable fear of controversy kept subsequent projects like “Israel: Pueblo Contacto” from ever appearing. The larger Defendámonos fared no better despite having been shopped around to other publishers. You can’t win them all, in ufology or any other endeavor.

What was originally meant to be a notice turned into an article, and you have my apologies. Very best holiday wishes to all our loyal readers and my wishes for success and prosperity in the coming years.

THE SAUCERS OF WARTIME