Navy Admits To ‘Another’ Secret Video Re The Nimitz UFO Incident 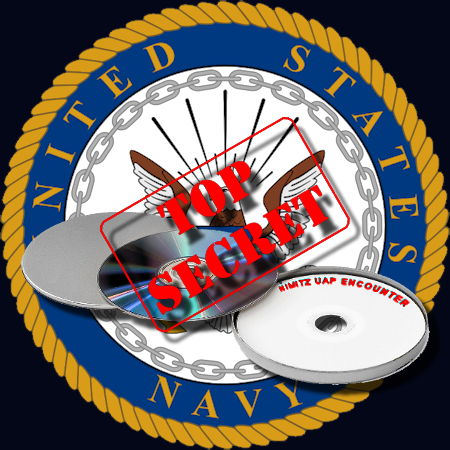 position to receive any of the material(s) detailed in the following paragraphs.

This request is to include all releasable portions of records and reports related to investigation of the detection of and encounter(s) withAnomalous Aerial Vehicles (AAVs) by personnel involved with the Nimitz Carrier Strike Group (CSG) operations off the western coast of the United States during the period of approximately 10-16 November, 2004. The designation ‘AAVs’ is used here because it appeared in a summary of these events, so there may also be other terms used in the material I am requesting.

Information supportive of my request comes from a former pilot and now writer who has publicly stated he was allowed to see an exhaustive classified ONI report on these events prior to an article he published in 2015. Other supportive information comes from a contractor/analyst who has stated that an investigation had been conducted by a “GS-15” with the Office of Naval Intelligence.

If any records responsive to my request originated with another agency and require review or handling by that agency, I request that I be informed appropriately of the agency(ies) involved and actions in this regard.

I also request that ANY and ALL partially releasable information be forwarded to the appropriate agency(ies) specified for review, if any, and that I be informed appropriately of actions in this regard.

In order to help determine the category in which to place this request, please know that I am a private individual requesting records for noncommercial research and study purposes. Therefore, I believe this request belongs in the “all other” fee category. However, I am willing to pay reasonable search and reproduction fees up to a maximum of $50.00 over and above the ‘2 hours’ research time and first 100 pages free’ provisions of the FOIA for costs associated with this request if necessary.

If my request is denied in whole or in part, I ask that you explain all deletions by reference to specific categories of exempted information, but as required by law, release any segregable portions that are left after the exempted material has been redacted. I also request that redactions be made using blackout not white-out.”

“This is a final response to your Freedom of Information Act (FOIA) request of October 28, 2019, addressed to the Office of Naval Intelligence (ONI). Your request was assigned the above referenced Department of Navy FOIA number. You request all releasable portions of records and reports related to investigation of the detection of and encounter(s) with Anomalous Aerial Vehicles (AAVs) by personnel involved with the Nimitz Carrier Strike Group (CSG) operations off the western coast of the United States during the period of approximately 10-16 November, 2004.

Our review of our records and systems reveal that ONI has no releasable records related to your request. ONI has searched our records for responsive documents. We have discovered certain briefing slides that are classified TOP SECRET. A review of these materials indicates that are currently and appropriate Marked and Classified TOP SECRET under Executive Order 13526, and the Original Classification Authority has determined that the release of these materials would cause exceptionally grave damage to the National Security of the United States. Specifically, under Section 1.4, the materials would trigger protections under subcategory c), the Intelligence Activities of the United States, as well as the Sources and Methods that are being used to gather information in support of the National Security of the United States. In addition, the materials would trigger protections under subcategory e), Scientific and Technological Matters related to the National Security of the United States. For this reason, the materials are exempt from release under the (b) (1) Exemption for Classified Matters of National Defense. As a result these records may not be released and are being withheld.

We have also determined that ONI possesses a video classified SECRET that ONI is not the Original Classification Authority for. ONI has forwarded your request to Naval Air Systems Command to make a determination on releasability…”

From there, Ms. V’Estres goes on to offer Lambright his standard rights of appeal, and a non-determination of fee waiver.

Evidently, the ONI’s response contains numerous issues worth raising. The ONI reviewed their “records and systems” but found “no releasable records” regarding the USS Nimitz “Tic Tac” UFO event. At first glance, this implies that they have nothing themselves to release. But interpreted slightly differently, the statement could also suggest that they in fact do have internal, homegrown records, but those records off limits. This, however, seems unlikely, due to the candid admissions that come next. During these searches, ONI discovered records originating from another agency. Designated as “briefing slides”, these items were deemed to be “classified TOP SECRET” under the well-worn Executive Order 13526, and the originating authority determined that they must stay that way. The reasons given relate, firstly, to “Intelligence Activities of the United States” and “Sources and Methods” which are used to collection national security information, and, secondly, to “Scientific and Technological Matters” related, again, to national security. Finally, the ONI admits to possessing a video which is currently classified “SECRET”. Again, the ONI has no authority to declassify it, but they did at least confess to who does. The originating agency is acknowledged as the Naval Air Systems Command (NAVAIR). Ms. V’Estres reply letter is imaged below: 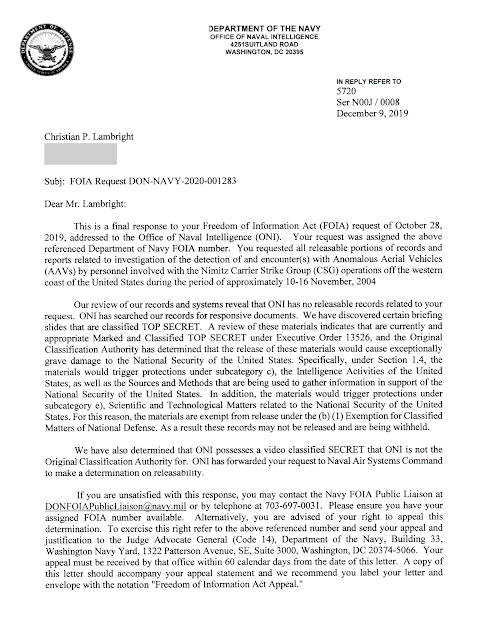 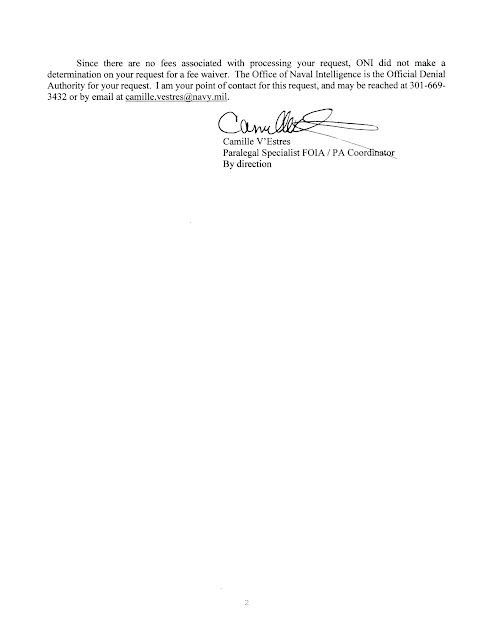 The Pentagon Explains Why They Changed Past UFO Statements

The 'Other' Nimitz, Tic-Tac UFO Witnesses

Navy Acknowledges UFOs — So Why Aren't They on Washington's Radar?

US Army Will Study ‘Metamaterials’ Collected by UFO Study Group

Navigating the Twisted Maze of the AATIP Timeline

A UFO Group and The Army Are Investigating … Something

The US Navy UFO incidents and 3 Reasons to Investigate

Does Tom Delonge / TTSA Have Debris From An Alien Spacecraft?

UFO Encounter Reported With Another Aircraft Carrier, The U.S.S. Enterprise

“… Navy Already Knows What These So-Called UAP's [UFOs] Are”