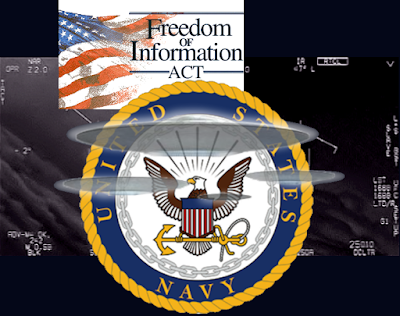 Editor's Note: Roger Glassel, is an independent researcher and writer for the Swedish quarterly magazine UFO-Aktuellt; he has doggedly been pursuing the Navy, et al for any and all information pertaining to the recent revelations regarding UFO encounters by said branch of the military, including the videos of UFO encounters and organizations or programs in place now or formerly, to investigate these matters.–FW

released now been explained by the Navy or any other component in the U.S. Defense Department?

A6). Neither has the Navy nor any other DoD component has publicly released characterizations, descriptions, hypothesis, or conclusions in regards to the objects contained in the referenced videos.

7). Was the new reporting guidelines updated due to pilots fear of ridicule for reporting sightings of Unidentified Aerial Phenomena and UFOs?

A7). We have updated guidelines and simplified the process to facilitate reporting of unidentified aerial phenomena in order to support an objective, data-driven analysis of the range incursions. By providing updated guidelines and conducting more open discussion of our efforts, we are working to remove any stigmas associated with reporting anything unknown in the airspace. Initial, informal, revised reporting guidance has been provided to the fleet, through message traffic and briefings, with detailed steps for reporting each incident. More formal guidance is in staffing and will be promulgated fleet-wide when completed.

8). Has the Navy, or any other component, come to the conclusion that some of the unidentified sightings reported is due to an aerial phenomena with technological features not currently known to mankind?

A8). The Navy has not publicly released characterizations or descriptions, nor released any hypothesis or conclusions in reference to any reported sightings/observations. As the investigation of UAP sightings is ongoing, we will not discuss individual sighting reports/observations. However, all possible sources of information pertaining to any individual sighting reports/observations are considered in the respective investigations. The information obtained from each individual report of any suspected training range incursion will continue to be investigated in its own right. The information obtained in these reports will be catalogued and analyzed for the purpose of identifying any hazard to our aviators. This process could involve multiple Department of Defense and Intelligence Community organizations. Any report generated as a result of these investigations will, by necessity, include classified information on military operations. Therefore, no release of information to the general public is expected.

9). In the Navy’s effort to study reports of Unidentified Aerial Phenomena, was former DOD/OUSDI employee Luis Elizondo involved in such effort?

A9). While he was a U.S. government employee, Mr. Elizondo occasionally provided coordination and professional connections/liaison within DoD and the Office of the Under Secretary of Defense for Intelligence.

10). What is the definition of Unidentified Aerial Phenomena used by the Navy and the U.S. Defense Department?

A10). “Unidentified Aerial Phenomena (UAP)” is a term we borrowed from the UK – it’s any aerial phenomenon that cannot immediately be identified. The wide proliferation and availability of inexpensive unmanned aerial systems (UAS) isn’t contradictory, it’s just when the UAS is *NOT* immediately identifiable we refer to it as UAP. A quadcopter is immediately identifiable. As we have previously acknowledged, the number of incursions into our ranges has increased with that wide proliferation and availability of inexpensive UAS. Additionally, we use the generic UAP term in communications so as not to pre-judge the results of any investigation.
Any range incursion by unauthorized craft affects the safety of our aviators and/or the security of our operations. Our revised reporting guidance solicits reports of any unauthorized craft (UAP or UAS) observed within our ranges so that we may investigate that range incursion. Incursions/sightings since 2014 may be referred to as either UAS or UAP, depending on the circumstances surrounding the specific incident in question.