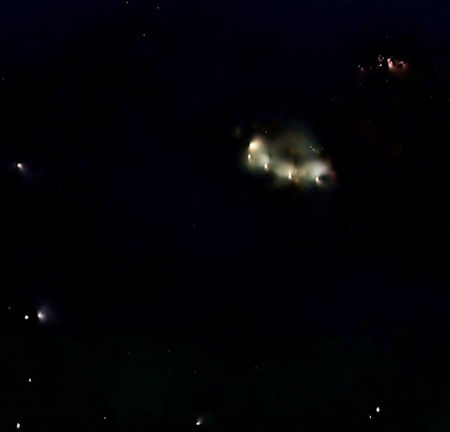 This supernatural experience took place in the Natania District of Rivadavia. Agustina Moreno, 20, claimed having seen a luminous object in the sky, very similar to a UFO (Unidentified Flying Object) that appeared at least for a minute, surrounded by bright stars, before disappearing. The startling image seen by her retina was captured by her cellphone at around 20:50 hours.

In a state of shock, she decided to contact Sanjuan8.com and relate her experience. "We were walking with my sister along Bella Vista avenue, and upon reaching the corner, I saw that object in the sky. It's the first time I've seen anything like it. We were shocked at first, because we had no idea what it was, and then I though about taking the photo, because no one was going to believe me," she said.

The young woman noted that it was the same strange object seen by other Twitter users in recent days. A researcher of this type of phenomenon presented what had been captured in recent days.