UFO Stalker
UFO Sighting in Las Vegas, Nevada on 2018-11-07 00:00:00 - Metalic orbs heading east near las vegas
At around noon on november 7, 2018 approx. 7 miles east of nellis afb i was outside listening to the radio when i observed what, at first i thought was a very large metallic plane(747 or larger) with occasional reflecting lights coming from it. i couldn't really focus on it at first. it was about 2 miles north of me where i first observed the object/objects heading east.
it seemed to be more of a blur at first so i grabbed my binoculars and watched it through the binoculars. that's when i observed it more clearly and realized that the reason i couldn't focus clearly on it was because it was a "group" of up to about 11 to 14 orb-like shiny metallic objects flying in a group continually changing positions within the group. they were traveling much faster than the jetliners which fly into or out of the airports in las vegas. the sun was behind me.
for a moment i thought it was a group of jets flying in a very tight formation, but when i was watching them through the binoculars they appeared to be metallic shiny orbs with something protruding out of them at different angles.
that many aircraft couldn't change position that quickly and fly so close to each other without some kind of mishap. plus, there was no sound coming from them. when i last saw them they had almost immediately changed into 2 strings with 3 or 4 of them on the top string and about 6, or more, of them on the lower string (upper and lower). the other 2 or 3 were leading the way in a curved pattern.
trying to describe their last position is that if you draw a backwards "c" and add more to the lower part of the letter. draw it with double the length in the lower string as that of the top section.
by the time i finally got out the camcorder they were long gone.

on a side note: i don't use illegal drugs or use alcohol. also, i am a trained observer when i was a member of the civil air patrol. 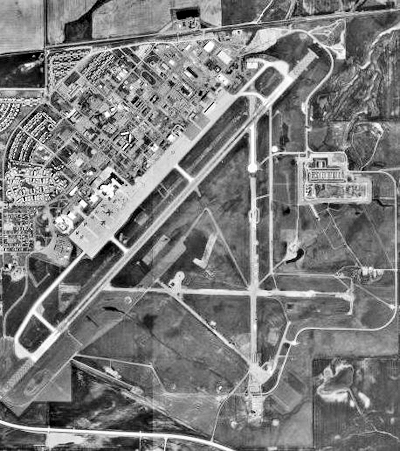 Malmstrom Air Force Base Picks Up UFO on Radar; "Sabotage Alert Team Located Another UFO Directly Over The Base"