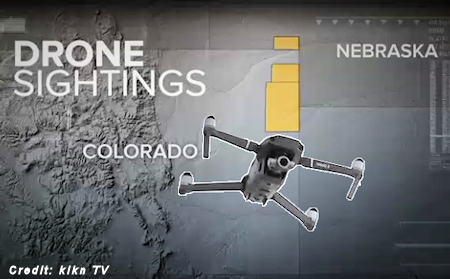 "I am so creeped out. It's so scary to think that these drones can just fly and do whatever they want, and there's nothing we can do about it," says Devin Groesser, near Gibbon.

The Chase County Sheriff's Office via their FaceBook page reported:

The Chase County Sheriff’s has been investigating sightings of Drones in Chase County since Saturday December 28th 2019. Last night we documented sightings in Chase County from the northern part of the county, to both the southern and eastern parts. These Drones appear to have a span of 5 feet so they are rather large. There were also sightings in Perkins County and as far east as Palisade. Deputies have been out tracking the Drones in order to determine where they were coming from and where the operators of the Drones are located.

The Sheriff’s Office has been diligently working with surrounding agencies in Nebraska and Colorado. We have been sharing information in an attempt to discover the origin of the Drones. We have also been in contact with Department of Homeland Security, FAA, and FBI. At this time we have been unsuccessful locating who is operating the Drones or what the motive is behind flying them in our area. We are continuing to work with State and Federal Authorities to solve this bizarre case.

The Sheriff’s Office would ask that you keep reporting the sightings of the Drones, so they can be documented, including any suspicious vehicles or persons in the area. Please call the non-emergency number at 308-882-4748. It appears the Drones are being flown after dark and continue for several hours. They have been spotted as late as 10:30 pm. We appreciate the public’s assistance in this matter.

Judge Rules That Home Owner Had a Right to Shoot Drone, Drops Charges