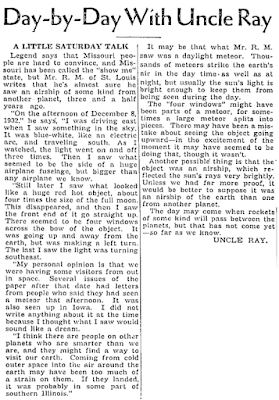 driving east when I saw something in the sky. I t was blue-white, like an electric arc, and traveling south. As I watched, the light went on and off three times. Then I saw what seemed to be the side of a huge airplane fuselage, but bigger than any airplane we know.”

"Still later I saw what looked like a huge red hot object, about four times the size of the full moon. This disappeared, and then I saw the front end of it go straight up. There seemed to be four windows across the bow of the object. It was going up and away from the earth, but was making a left turn. The last I saw the light was turning southeast.”

"My personal opinion is that we were having some visitors from out in space…."

"I think there are people on other planets who are smarter than we are, and they might find a way to visit earth. Coming from cold outer space into the air around the earth may have been too much of a strain on them. If they landed, it was probably in some part of southern Illinois.”

Tagged with: chronicle • having • space • visitors